Home » About Us » Online Tour 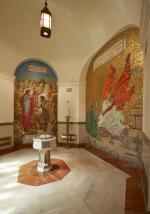 To the left as you enter the Cathedral is the Baptistry, which is placed there as sign that baptism is the entry point for one who joins the Christian community and becomes a part of the worshipping community, the Body of Christ.

Since baptism is directly connected to the Eucharist, the baptismal font is made of the same marble and design as the main altar. The mosaic behind the font, designed by Jan de Rosen, shows St. Matthew baptizing in Ethiopia. The mosaic on the north wall depicts the pool at Bethesda near Jerusalem that is mentioned in the Gospel of St. John.

The stained glass windows were designed in “dalle” by Gabriel Loire in Chartres, France. In front of the windows is the ambry containing the vials of sacred oil used to anoint those preparing for baptism (oil of catechumens), to anoint those being confirmed and ordained (oil of chrism) and to anoint those seriously ill (physically or mentally) and dying (oil of the infirm). 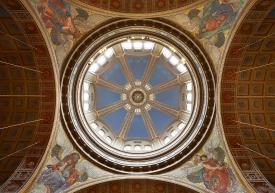 Over the transept of the nave is the dome, rising to a height of 190 feet above the floor of the nave. 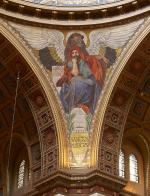 The dome is supported by pendentives crafted of Italian tesserae mosaics that represent the four evangelists and the symbolic tetramorphs or iconic symbols: St. Matthew with the angel in human form, Mark with the winged lion, Luke with the winged bull and John with the eagle.

These are the two side sections of the nave on either side of the main nave. The west transept contains a mural entitled The Calling of St. Matthew, painted in 1926. Matthew is depicted as being surprised by the words of Jesus.

The east transept contains a mural entitled The Martyrdom of St. Matthew (detail right). On one side of Matthew is an officer who has given the execution command and on the other is the executioner wielding his sword. 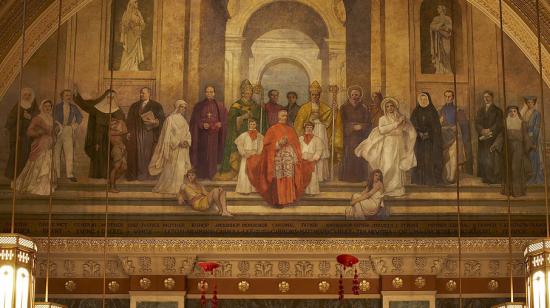 In this lunette above the Cathedral doors are many important historical personages of the Catholic Church in the Americas, in particular, Baltimore and Washington. 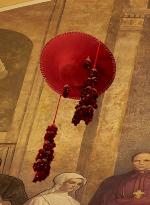 In front of the mural hang two red hats, called galeros. These hats were formerly worn by cardinals as part of their formal clerical dress dating back to the Renaissance. These two galeros commemorate the two deceased Cardinal-Archbishops of Washington, Patrick O'Boyle and James Hickey, who are interred in the crypt located in the St. Francis Chapel. Upon their death, the galero is hung and remains there until it decays and falls.

Stations of the Cross and Consecration Crosses 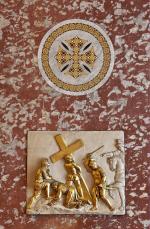 The fourteen stations along the walls of the Cathedral were a gift of Colonel Jerome Bonaparte, the grandnephew of the Emperor Napoleon, and his wife who lived in Baltimore. These images were crafted in Italy and made of ceramic; they were redone in their current form in the 1960s.

Above the stations are the consecration crosses of inlaid marble designed after similar crosses in the 12th century Cathedral of Monreale, near Palermo, Sicily. They mark the place where the candles burned during the liturgy that formally consecrated the structure as a church.