In Loving Memory of Our Friend James Walsh

January 6, 2021 | In Loving Memory of Our Friend James Walsh 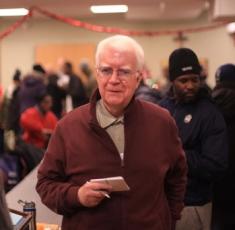 Clergy and parishioners share their memories of Jim and how he impacted their lives...

“I thank God for bringing Jim into my life. He was kind and compassionate. He had a way of diffusing bad situations. He will truly be missed.”
- Kevin Coates

"I remember Jim with his clipboard of names at the Monday morning homeless ministry. He was always there handing out name tags and checking names off his list. It is such a simple thing, yet to me it speaks volumes about him. Everyone in that room, whether guest or volunteer, was a person with a name, and that mattered to Jim. He didn’t really need the clipboard. He knew the names by heart, he remembered them, because he cared. When someone didn’t show up, he asked about them. A good shepherd “calls his own by name” (Jn 10:3), and Jim showed us all what a good shepherd looks like. He taught me that at the end of the day it is all about people and relationships. I feel blessed that he knew my name." 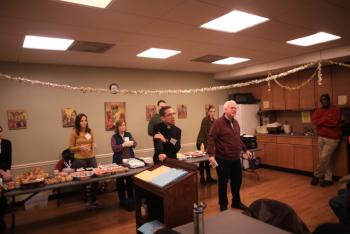 "I remember Jim on both Sunday and Monday mornings.  My memories on Monday mornings were summed up nicely by Fr. John.   Those sentiments were also seen on Sunday morning at the 8:30 Mass.  Jim was the head minister of hospitality for that Mass and he knew what hospitality meant.  He welcomed everyone who walked into the Cathedral as well as all those visitors who arrived by chartered bus.  He escorted visitors to their seats, gave them brochures, and introduced them to the Rector!  That aspect of welcoming is so important to liturgy and he was great at it.  I am sure he received a real hearty welcome when he entered the pearly gates.  And Jesus was proud to welcome him and to show him around his new home." - Msgr. Ronald Jameson, Rector

"Jim was a man for whom I had the utmost respect and admiration. When I returned to St. Matthew's many years ago, Jim became a mentor and inspiration to me, taking me on first as an assistant to him as an usher. From this, he guided me to the Parish Pastoral Council which in turn led to the Social Justice Committee where I eventually became Chair. In that capacity, Jim was always there to lend me background and inspiration, especially with regard to the homeless. I could go on and on about how much he has done for and meant to me, but suffice it is to say that I have become a better man for having known Jim and I pray every day that I may be more like him if that is even possible. He is now and will always be in my thoughts and prayers.”
- Gregg Glotnis
“I cannot imagine my life or anyone else's life at St. Matthew's without this wonderful person and dearest friend. No kinder or more generous and compassionate heart exists. Giving was his reason for being. This is our beloved Jim.
When others were in need, he did whatever was necessary for their spirit, souls, and well-being, while inspiring us to do likewise. He treated everyone with dignity and respect. Jim knew everyone by name at the Homeless Ministry Breakfast. They were friends and souls who knew Jim cared with every kind act and word. He was a treasure trove of good deeds, often accomplished out of view. An inner grace seemed to guide his exceptionally benevolent and empathetic nature.
Jim was the consummate person and gentleman, always gracious and courteous, with a kind and endearing personality. He shared his brilliant and discerning intellect and vast knowledge enthusiastically with others, and elegantly expressed his excellent taste in his surroundings. Jim remembered everyone and kept in touch. Who else but Jim would attend his kindergarten class reunion, and where else but in Scranton, his (and my family’s) hometown, where past meets present?
He did have, however, one singularly wicked (as in playful) quality. It was his wickedly clever wit, a boyishly disarming way to make you laugh, feel comfortable, and know in your heart, especially if you were a breakfast guest, that you were valued and loved. Smiling and sharing as friends, so essential to mutual respect, further confirmed Jim's insightful heart and soul. 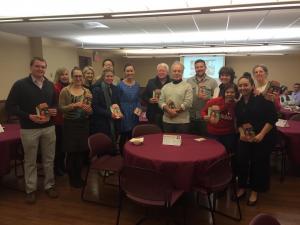 We will carry Jim in our hearts. He taught us how to use them. We all have our memories and mementos of Jim. I will think of his incomparable generosity, giving heart, and loving soul, and thank him for being one of the dearest friends imaginable. And when looking at my little memento, a sublime brilliant crystal snowflake, suspended by ribbon, that casts the morning sun into rainbow colors, I will think of Jim.”
- Sharon A. Savinski
"First impressions are often wrong, but I think my first impression of Jim turned out to have some truth to it: Santa Claus. This was initially because of his white hair, roly-poly physique, and his extraordinary kindness toward everyone--especially the irksome. Only later did I learn of Jim's incessant generosity, and that, like the original St. Nicholas, mostly he did this behind the scenes, so few knew.
Our Monday morning homeless program now is a shadow of what it was. But, sometime next year let us hope, we will return to doing something similar to what we used to do when Jim was in charge. In some ways, Jim's passing will make this harder. We have already talked about this and how it will take at least four of us to fill his shoes! But now that Jim will be watching over us from on high, we have another powerful reason to do the work and to be faithful to his memory. I am certain none of us have any doubt about this: his example will guide and inspire us forever."
- James Nash 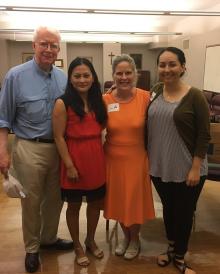 “I could go on and on about all Jim did for Parish Council and ushering and hospitality (yup, he hosted at 7 a.m. for years!) and the Renovation of the Cathedral and more.  And, of course, his care for the homeless is legendary. Jim would organize the Christmas party the night before – stocking the shelf with many gifts that he personally purchased.  He also helped host the biannual dinners for the homeless – standing at the door throughout the entire event welcoming everyone and wishing them farewell at the end.  Paulin Leonida remembers that he only missed once in over a decade – when he attended a relative’s wedding.
Both Jim and I were trademark lawyers, and he was a trademark judge.  Recently, I’ve had the privilege of sharing memories of Jim with those in that world as well as the Cathedral world.  Jim is highly respected and missed in both.
What I’m going to remember about Jim is not so much about what he did (because there is simply too much to recall), but who Jim was – always a gentleman – in the truest sense of the word.  I had to email someone about Jim, and her response was, “He was such a gentleman.”  It’s not surprising that both of us think of him that way because that is who Jim was:  chivalrous, courteous, honorable, noble, trustworthy, honest, respectful, faithful, polite, kind – to all. God got himself one amazing angel when Jim joined him in Heaven!”
—Nancy Lutz 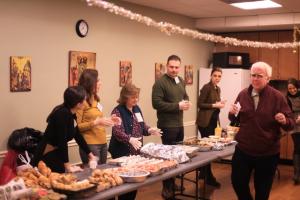 “I met Jim in 2018. I had just completed the "Landings" program for returning Catholics and was interested in getting involved in a service ministry. I showed up on a chaotic Monday morning--volunteers scrambling and Jim fretting that we may not have enough food to serve. He shook my hand (remember when we did that?), made me a name tag and pointed me to the coffee station. Hence, the start of my career as the St. Matthew's barista to the homeless. I did not know anything about our guests and felt uncertain and nervous, but I quickly learned how to learn--just watch Jim. He always came from a place of respect and kindness--firm when he needed to be, quick with a grin or a joke and ever aware despite his limited vision. He also was courageous. On more than one occasion I saw him step between two angry guests and defuse a situation that was about to turn violent. Others hesitated --myself included, but Jim stepped right in. I also saw him weekly as a faithful usher at the 8:30 Mass, and I cherished his nod and wink as I left the aisle to receive communion. Jim leaves us his example and legacy. We have big shoes to fill, but with God's help I know we can do it. Thank you, Jim.”
—Philip Downey
“Jim Walsh was a blessing to the world. He was one of the most selfless people I have ever met and it was a true honor to have gotten to know him and to volunteer with him at St. Matt's. He was an extremely kind, gentle and giving soul and such an intelligent, wise person with a wealth of meaningful experiences and insight. Talking with Jim was so interesting because he was truly extraordinary as was the life he led. He was pure of heart and spirit.  It is not often that one comes across altruism in its truest form, but Jim allowed me to see it. When a person is dear to our heart, we take the good with the bad. Although I have only had the pleasure of seeing Jim on a few occasions, in my view, there was only good. May he rest in peace and may the heavens welcome his soul to his new home as his legacy and the incredible life he led lives on forever.”
—Kat Kaltenheuser 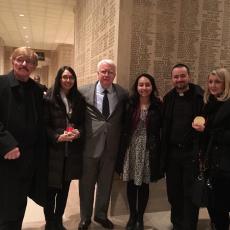 " 'Well done, good and faithful servant...' One can easily imagine the Lord welcoming Jim into his heavenly kingdom with this verse from Matthew 25:21. On December 7, 2020, James Walsh, long-time parishioner and active member of the parish community, passed away. It is with heavy hearts that we share this news and pray that his family, friends, and our entire parish community find comfort in our memories of praying with and serving alongside him. Many recall volunteering with him as ushers, welcoming visitors and parishioners on Sundays, while others will forever remember Jim for his service to the poor. Jim’s most outstanding characteristics of kindness and charity were admired by many who had the honor to serve with him on Monday mornings at St. Matthew’s Homeless Ministry. His kind demeanor in welcoming volunteers onboard to serve our unhoused and struggling brothers and sisters inspired many to remember to see Christ in their neighbor... (read more here). Personally, I will forever remember Jim and his kind soul... and laughing with him about jokes he remembered from The Office tv show. I pray that I will always be inspired by his love and service to the poor and can emulate the way he served. I am grateful and blessed to have gotten to know Jim for 9 years and am thankful to have worked with him in ministry."
—Norma Cindy Canedo
Return to the blogpage ⇒