Holy Week Events in the Gospel of Matthew 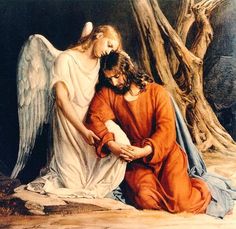 Fr. Jack Hurley writes, "The Gospel of Matthew, all ten chapters from 19 to 28, contain a full picture of the Lord in his final days, a period that we recognize as Holy Week." Read his full summation below.

The first chapters are an account of His journey to Jerusalem, including the third Passion prediction of what would await Him. With His entry into Jerusalem, the Messiah hailed as Son of David is none other than Jesus of Nazareth. Matthew next presents Him as taking possession of the Temple and then leaving for Bethany. In the process Jesus reminds His hearers of the power of prayer.

The following days are busy ones in Matthew’s presentation, as they concern a final settling of accounts, as well as parables of the two sons, the wicked winegrowers, and the marriage feast. He encounters trap questions on tribute, resurrection, commandments and David. Jesus responds with a denunciation of the Scribes and Pharisees, the seven woes as antitheses of the Beatitudes, and lament over Jerusalem.

In His discourses on the end of the world ( 24: 1-25: 46 ) Jesus addresses a series of warnings, the need for perseverance, and the parables of the ten bridesmaids, and of the talents. We hear of the enthroned Son of Man judging the sheep and the goats, the apocalyptic context of the universal judgment, and a warning demanding a very different religious standard from the Pharisees and from the World.

Chapters 26 and 27 then focus on the final hours, the condemnation of Jesus, and His death and burial. The tragedy starts out with the decision of the authorities. There is an anointing at Bethany, which unknowingly serves as a preview of what is to come. Then, the betrayal of Judas is revealed.

Matthew’s presentation of the Last Supper unfolds with the preparation of the Passover. The meal includes the naming of the traitor and prediction of Peter’s denial. The Institution of the Eucharist ( 26: 26-29 ) is a highlight, with announcement of the “New Covenant”.  Concluding the meal, they “chanted the Hymn of Praise” and then Jesus took “Peter and the two sons of Zebedee” out to the Garden of Gethsemane. His agony and prayer there conclude with the arrest of “Rabbi”.

The condemnation of Jesus is initiated by the Jewish Trial, as He is brought before the High Priest Caiphas and the Sanhedrin. The focus now briefly moves to the threefold denial of Peter, just as Christ had predicted.

Then comes the Roman Trial before Pilate, including the caution given him by his wife. A reluctant Pilate is led to his decision to free Barabbas rather than Jesus, and agree to Christ’s death. There follows the end of Judas. Here we find a relationship to Zech 11:9-17.

Matthew’s Passion concludes with the death and burial of Jesus.  He is crucified amidst derision, and His final words from the Cross include the beginning of Psalm 22. Astounding events surround Christ’s death, recalling Joel 2:10.  The burial by Joseph is followed by the placing of a guard by the Tomb.

This portrayal of Holy Week in Matthew’s Gospel is given principal attention this year in the readings in Church.  It would be wonderful to follow this moving account by reading it ourselves in full, as we accompany Jesus in His last days.