Dr. Gerald Muller, May He Rest in Peace

The Mass of Christian Burial for Dr Gerald Muller will be celebrated Monday, December 14 , 10am Eastern at St Hugh of Grenoble Church, Greenbelt, Md.  COVID-19 restrictions limit attendance to invited participants, but friends and colleagues are encouraged to join the livestream on the parish Facebook page. https://www.facebook.com/sthughgrenoble/.

It is with heavy hearts that we share the news of the death of Dr. Gerald Muller, beloved former Director of Music at the Cathedral of St. Matthew the Apostle, and father of Jennifer Muller Goltz, our current Director of the Contemporary Choir. We extend to Jennifer and the Muller family our heartfelt condolences and love. May the angels lead him into paradise, and the martyrs come to welcome him and take him to the Holy City, the new and eternal Jerusalem. May he rest in peace.

At this time we have no information about services. For all who have been touched by Dr. Muller’s work and legacy here at St. Matthew’s, and anyone unaware of his foundational contributions to the Cathedral’s musical life and history, we offer the following tribute.

Gerald Muller was born in Clifton, NJ and grew up in Claymont, DE, where he began his vocation as a choir boy at age 11 in his local parish. He attended the Juilliard School of Music in New York from 1949 to 1952 and was awarded a degree in English Literature from Niagara University and later, degrees in musical composition from The Catholic University of America. Dr. Muller, in addition to writing five operas, also sang lead roles in others and conducted and staged over 200 musicals and operas. He held the Director of Music position in several parishes in the Archdiocese of Washington and was Associate Professor of Music at Montclair State University in New Jersey and Professor of Music at Montgomery College in Rockville, MD. He recently retired as Director of Music at Theological College, at Catholic University, and was principal organist at St. Hugh of Grenoble Catholic Church, in Greenbelt, MD where his daughter, Jennifer, is the Director of Music.

Dr. Muller was appointed the Cathedral’s Director of Music in the summer of 1980. At that time there were four members of the choir and the organist was a graduate student at Catholic University.  The choir was immediately increased to 16 members and a program was developed consistent with the General Instructions of the Roman Missal, Musica Sacra, and the other documents of the church pertaining to music and liturgy. This roster was later expanded to include four professional singers,16 paid singers and many volunteers. Later still, the music ministry would include a professional contemporary music group of 15 singers for the Mass at 5:30 pm on Sundays, and an Hispanic choir.

In the beginning of his tenure the choir sang from the current Blessed Sacrament Chapel with the organ console underneath the former choir balcony. While this arrangement was visually and liturgically less than ideal, the musical result was well received, especially due to the favorable acoustics of the Cathedral. When the new organ was installed in the east transept in 1995, the choir position was changed to its current location. 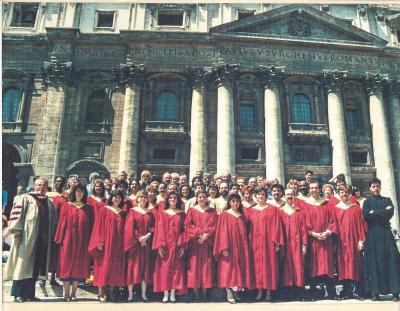 A notable occasion for Dr. Muller and his choir was the trip to Rome in May 1988 (Dr. Muller at far left in photo) when the choir sang at a general Papal audience, a special memorial Mass in the titular church of Cardinal O’Boyle with Cardinal Baum as principal celebrant, at a vespers service in the Basilica of St. John Lateran, and a concert at the church of Sant Ignazio (St. Ignatius) to a standing room only audience. The choir, joined by a number of Cathedral parishioners, also visited the Basilica of St. Francis at Assisi.

There were many noteworthy liturgies at the Cathedral as well as sacred concerts and recitals during this time. The Red Mass each October, often with the President of the United States, members of the Supreme Court, and members of Congress in attendance, remains one of the most memorable liturgical events of the year. It provided Dr. Muller the challenge and the opportunity to present not only music at a high level but also music which served the liturgy and encouraged the prayer of those in attendance, no matter what their faith tradition. And whether it was a simple daily Mass attended by members of the local business community and parishioners or the great liturgies of Christmas and Easter, Dr. Muller took care to be faithful to the teachings of the Church and yet also to present the vast musical repertoire of centuries of church music. He also was an accomplished composer of liturgical musical that is placed into service here at the Cathedral and in churches throughout the country to this day.

One of his greatest accomplishments was his ability to establish a well-ordered, professional corps of musicians to provide for the musical needs of liturgies from the most intimate to the most public. Funerals for national figures, and weddings for well-known families and parishioners became a regular assignment. During his years, every sitting U. S. President was in attendance at least once. Because the Cathedral is in the Nation’s capital, international church leaders, leaders of Catholic countries, politicians and diplomats were frequently guests at the Cathedral.

One of the considerable challenges Dr. Muller faced on his arrival in 1980 was the failing condition and flawed design of the 1951 Moeller Pipe organ that spoke ineffectively from a remote chamber above the Blessed Sacrament Chapel. To his great credit, and with the assistance of organists Jay Rader and 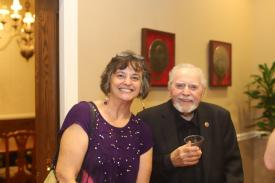 Robert Gallagher, and the blessing of Msgr. Louis Quinn, the planning, design and installation of its replacement, the Lively-Fulcher Great Organ, became an enduring highlight of Dr. Muller’s tenure. Completed and fully realized in 2019, the instrument is considered one of the finest in the nation. Dr. Muller was present as an honored guest at its rededication on May 10, 2019, and at the September 20, 2019 Dedicatory Recital (photos at right of Dr. Muller at the post-recital reception, with 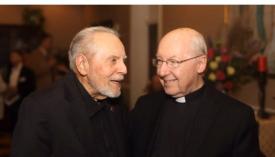 his daughter, Jennifer Muller Goltz, and below, with Msgr. Jameson). He also is credited with the redesign and construction of the choir room and offices which provided much needed rehearsal space and a work area for the director, the organists and principal cantors.

Dr. Muller retired from the Cathedral in the summer of 1997 to develop other career pursuits. He cherished his time at the Cathedral and regarded the opportunities to be actively involved in the worship of the Roman Church especially with the resources of the great repertoire of the church, from Gregorian Chant to the most current musical styles, as his enduring legacy.

We thank and praise God for the gifts that Gerald Muller shared so generously with the Archdiocese of Washington and our Cathedral parish.