Popes, Presidents, and Saints at the Cathedral

Msgr. Jameson notes that the January 20, 2021 Mass honoring the inauguration of our nation's second Catholic president was "an outstanding liturgy," and a reminder of the major role the Cathedral historically has played in the Catholic life of our nation's capital. Here's a look back.

Twice we have been honored with a visit from the Chief Shepherd of the Church Universal―in 1979 when Pope St. John Paul II celebrated Mass, and in 2015, our 175th Parish Anniversary year, when Pope Francis came to pray with our nation's bishops. President John F. Kennedy's funeral mass was celebrated here on November 25, 1963. Requiems have been held here for several heads of state. St. Teresa of Calcutta visited the Cathedral in 1974, when Msgr. Jameson―then an Associate Pastor―moderated a press conference given by Mother Teresa. The Red Mass celebrated each fall is attended by U. S. Supreme Court justices and members of Congress, the cabinet diplomatic corps and other government departments. Among the U. S. presidents who attended while in office were John F. Kennedy (our first Catholic President), Lyndon Johnson, George H. W. Bush, Bill Clinton, and George W. Bush. 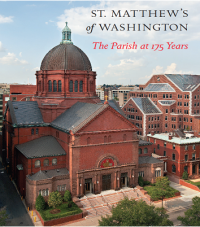 If you're interested in the origins and history of the Cathedral parish, you will enjoy St. Matthew's of Washington: The Parish at 175 Years,published during our 175th Anniversary Year. It features historical narratives, fascinating stories, and images from our first 175 years. This volume is the work of the 175th Anniversary Publications Committee, chaired by Mary Moran, with members Suzanne Bechamps, Daniel Evans, Stephanie A.T. Jacobe, Andre Mander, and Elizabeth Sullivan, and Joseph Carey as editorial and production manager. To order a copy ($20), call the rectory office at 202-347-3215.