In New Testament writings, Matthew is known by the name “Levi” and also as the “son of Alphaeus.” Levi was probably his original name. He may have been given the name Matthew (translated from the Hebrew to mean “gift of Yahweh”) when he became a follower of Jesus. 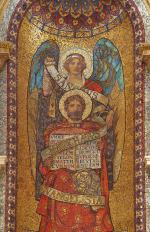 His position as a collector of taxes for the Romans classified him as a publican. The position was not popular with the general public, even less so with the Jewish class of people known as the Pharisees. In fact, Jews who held this office were not permitted to marry a Jewish woman nor worship in the synagogue and were generally shunned by civil society.

Matthew's life is changed when Jesus comes upon him carrying out his tax collection duties in the custom house. Jesus calls out to Matthew: “Follow me.” Matthew, without hesitation, left all his interests and becomes a disciple of Jesus, embracing his teachings. It is possible that Matthew had already been aware of Jesus and his teachings, since he was probably from the same territory (Galilee) in which Jesus had been teaching.

His deep awareness and belief in Jesus was the impetus for his later undertaking to author the sacred and inspired book that we know as the gospel according to Matthew. He is known as evangelist from the Greek word evangelion, meaning good news.

Because of Matthew's duties as a public official, the Church has designated him as the patron saint of civil servants and all who serve government in some capacity.

He is honored in the Church's liturgical calendar on September 21st.