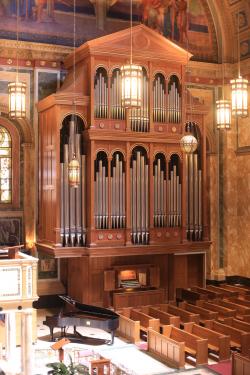 The Cathedral has a magnificent four-manual French Romantic organ built by the firm of Lively-Fulcher. In addition to being played at Mass and other liturgies, the organ is featured each year in concerts and recitals that are always free and open to the public.

We are delighted to announce that, nearly 25 years after the initial partial installation of the Lively-Fulcher Great Organ at the Cathedral of St. Matthew the Apostle in Washington, D.C., the organ is now complete. In June 2018, the original builder returned to the Cathedral to begin work on the long-awaited completion. All five divisions of this four manual mechanical action French Romantic organ were heard for the first time publicly on Friday, May 10, 2019 at a recital that began at 7:30pm.

History of the Organ

The Cathedral has enjoyed a rich musical tradition dating back more than 100 years. The first instrument designed for specifically for St. Matthew’s Church (prior to its 1939 designation as a cathedral) was a 39-stop, two manual (tracker pneumatic) and pedal (tubular pneumatic) organ placed in a chamber that opened above and behind the present Blessed Sacrament Chapel. Its console was located on the nearby choir loft on the west side of the sanctuary. This new organ begun in 1910 by William Bardroff of Baltimore, MD made substantial use of an earlier organ in the same location that apparently came from the original St. Matthew’s Church on 15th and H Sts, NW.  The record of that organ is found in a detailed contract dated August 15, 1874 for a 27-stop, mechanical action, two manual and pedal instrument built by Henry Erben of New York City.

In 1951, the Bardroff organ was replaced by a large electro-pneumatic Moeller pipe organ placed in the same chamber and containing 2,891 pipes. It is this instrument that can be heard in recordings of President Kennedy’s Funeral Mass in November 1963. Because of its unfavorable location, however, it was difficult for the sound to reach the main body of the Cathedral. An antiphonal division of 1,079 pipes was added above the entrance of the Cathedral in 1974 to correct this problem.  This “solution” created constant tuning challenges as the unconditioned chamber and the new antiphonal division fluctuated in temperature and humidity in unequal degrees.

Furthermore, in the early 1980s, mechanical failures in the Moeller instrument became increasingly frequent.. In fact, many parts of the instrument had not worked for years. Following a thorough study, the Cathedral clergy and music staff concluded that, even after costly repairs, the existing instrument could no longerreliably perform its primary liturgical functions. The Cathedral decided to pursue plans for a  new organ that would be free-standing and encased, employing mechanical actions as its primary means of control.

The new organ case would allow the instrument to project its sound directly into the Cathedral nave,  eliminating many of the tuning and tonal problems with the previous organ. Mechanical action was chosen for the key action because of its durability and sensitivity to touch. Upon the recommendation of Dr. Gerald Muller, director of music, and Jay Rader, Cathedral organist, James Cardinal Hickey, Archbishop of Washington, and Msgr. W. Louis Quinn, the Cathedral rector, allocated modest funds for the construction of the new instrument, allowing for future additions as bequests and donations made  possible. The use of a case and mechanical action for the new instrument was aimed at achieving long-term reliability, ease of maintenance, and great tonal advantages, thereby ensuring the best stewardship of funds.

The Lively-Fulcher firm took over the reins of the project in 1993, after an initial effort by two other builders (Schudi and M. P. Moeller) who were unable to carry the project to completion.

Rather than wait until the organ project was fully funded, it was decided that even half of the intended  organ stops would adequately serve the Cathedral’s liturgies while the remaining funds were raised. The first phase of the Great Organ was installed with 2,900 of the planned 5,176 pipes.  Its debut was on March 20, 1995 at the 50th Anniversary Mass for Cathedral Rector Msgr. Quinn, a strong and dedicated supported of the organ. The effort was extremely successful and well-received by parishioners and the Washington artistic community.

As with many projects that begin in phases, the next steps were the most challenging. Fortunately, the organ installed in 1995 remained in excellent condition such that  completing it as planned remained both desirable and practical. Furthermore, the same firm that began the work was able and anxious to take advantage of nearly 25 more years’ experience to create a truly remarkable work of art.

In 2013 the Cathedral began in earnest to raise the necessary funds to fully realize the vision that launched the organ project in the 1980s. Through the generosity of hundreds of parishioners and friends, a contract was signed in 2015 to complete the work.

Since June 2018, new keyboards, a new blower, windways, chests, a new combination action and 2,276 new pipes have been installed. The new stops constitute some of the most varied, dramatic and unique colors of the instrument. The sounds to  be heard in this French Romantic organ are ones that one could hear in the great churches and cathedrals of France, particularly in Paris. Happily, the music of Bach and earlier composers  also will find a suitable home in the polyphonic clarity of this instrument.

Features of the Organ

The organ case is built of white oak and contains polished tin pipes in the facade. It reaches a height of nearly forty-five feet at the peak. The goal was that the case not only function well, but  make an artistic visual statement in harmony  with the Cathedral architecture. The instrument contains five divisions and 68 stops.

The organ takes its inspiration from the 19th-century French organ building traditions but is designed to maintain polyphonic competence for earlier music. The unusually complete stop list allows for the performance of vast and varied organ literature and will serve its liturgical role in a noble fashion.

An Inaugural Dedicatory Concert Series began with the Dedicatory Recital on September 20, 2019 at 7:30pm, the Vigil of the Feast of St. Matthew, featuring one of the most celebrated and sought-after recitalists in the world, Nathan Laube.

Enjoy the video below of Nathan Laube playing Richard Wagner's Overture to Tannhäuser during the rehearsal for the Inaugural Dedicatory Recital, courtesy of JAV Recordings. JAV writes of this performance, "You will hear the warm foundations, dramatic reeds (including hooded reeds 16, 8, 4 in the Bombarde division which play the theme of the "Pilgrim's Chorus") and the shimmering strings. Congratulations to Lively-Fulcher on the completion of such an incredible and versatile instrument."

We hope you were able to join the Cathedral Parish community and friends of music from around the area as we rededicated this magnificent instrument at its debut. All five divisions of this four manual mechanical action French Romantic organ were heard for the first time publicly on Friday, May 10, 2019 at a recital that began at 7:30pm. Five current and former organists helped us bring this new instrument to life, exploring the vast color and dynamic range of its nearly 5,200 pipes. View the program for the Rededication of the Lively-Fulcher Organ.Read the Catholic Standard story on the Rededication of the Great Organ.

Make a Donation to the Music Program

If you would like to make an online donation directly to the music program especially as we prepare for the celebration of the completion of the Cathedral Great Organ, please follow the directions below:

Many thanks for your support!

View a full list of the stops of our
Lively-Fulcher organ.