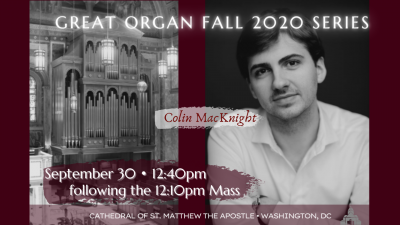 Organist Colin MacKnight inaugurates the fall 2020 portion of the newly resumed Cathedral Great Organ Concert Series with a recital at 12:40pm, open to the public and livestreamed from the Cathedral on our YouTube Channel. Come, bring a friend, and enjoy this 40-minute program in person, or watch live or later.

Organist Colin MacKnight will present a 40-minute concert on the recently completed Lively-Fulcher Great Organ on Wednesday, September 30, 2020 at 12:40pm, following the 12:10pm Mass. We are so pleased once again to give our parishioners and the greater Washington, DC community the opportunity to hear marvelous music in a concert setting.

Featured works include Fantasia and Fugue in G, Op. 188 - C. Hubert H. Parry, Fantasia and Fugue in C minor, BWV 537 - Johann Sebastian Bach, Fantasia in F minor, K. 594 - Wolfgang Amadeus Mozart and Étude Héroïque, Op. 38 - Rachel Laurin. This concert will be both open to the public, with strict social distancing and CDC guidelines observed, as well as livestreamed on our YouTube channel. Seating areas will be roped off and  face masks will be required to enter the Cathedral.

The second concert of our newly resumed series will be a special all-Liszt concert on both the Great Organ and the Steinway Concert Grand Piano on Sunday, October 25, 2020 at 3pm. Details will be available shortly.

Colin MacKnight, called “a stunning player of exceptional ability” by composer and conductor Bob Chilcott, is a C.V. Starr Doctoral Fellow at The Juilliard School, where he also received his Bachelor’s and Master’s degrees. A student of Paul Jacobs, Colin is working on his dissertation entitled “Ex Uno Plures: A Proposed Completion of Bach’s Art of Fugue.” 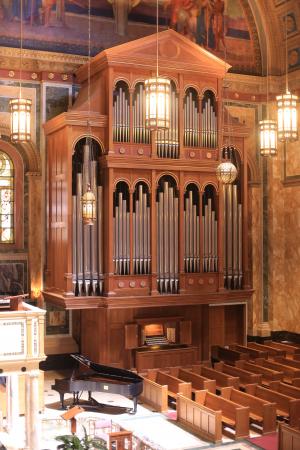 In December of 2016, Colin and composer Jon Cziner were selected for an AGO Student Commissioning Project grant, resulting in Jon’s Fantasy Chorale which Colin premiered in 2017. Colin has also received the Fellow and Choirmaster Certifications from the AGO, receiving the prize for top Choirmaster score, and was named one of the top “20 Under 30” eminent young organists by The Diapason magazine in 2019. Colin has performed at venues such as St. Patrick’s Cathedral, NYC; The Cathedral of Saint John the Divine, NYC; St. Paul’s Chapel of Trinity Wall Street, NYC; The National Cathedral, Washington, DC; Saint-Jean-Baptiste Church, Montreal; Church of Saints Peter and Paul, Kingston, Jamaica; Cathedral of the Incarnation, Baltimore; and Grace Cathedral, Topeka.

For more information, media, and a calendar of performances, please visit colinmacknight.com.