Internationally celebrated musician Sandro Russo continues our fall 2020 portion of the newly resumed Cathedral Great Organ Concert Series with a recital on our Lively-Fulcher Organ and the Steinway Concert Grand Piano at 3:30pm on Sunday, October 25, open to the public and livestreamed from the Cathedral on our YouTube Channel. Come, bring a friend, and enjoy this 50-minute program in person, or watch live or later. 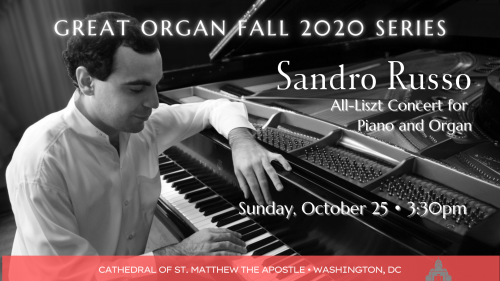 Sandro Russo will present a 50-minute concert for piano and organ, playing on the recently completed Lively-Fulcher Great Organ and the Steinway Grand Concert Piano, on Sunday, October 25, 2020 at 3:30pm. We are so pleased once again to give our parishioners and the greater Washington, DC community the opportunity to hear marvelous music in a concert setting. Come, bring a friend, and enjoy this 50-minute program in person, or watch live or later. Social distancing and face masks will be required in the Cathedral.

Acclaimed for his profound sense of poetry and distinctive style, Sandro Russo has been in demand as a soloist in many venues around the world. He unanimously receives accolades for his sparkling virtuosity and his playing has often been referred to as a throwback to the grand tradition of elegant pianism and beautiful sound. Abbey Simon has praised him as “an artist to his fingertips…musical, intuitive, and a master of the instrument.” Lowell Liebermann has called him “a musician’s musician, and a pianist’s pianist. There is no technical challenge too great for him, but it is his musicianship that ultimately makes the greatest impression. His interpretations reveal a unique and profound artist at work.” 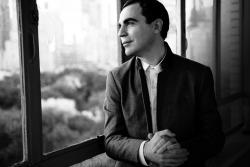 More About the Artist

Soon after Mr. Russo moved to the United States in 2000, he won the Bergen Philharmonic Orchestra Concerto Competition, which led to a performance of the Liszt A major Concerto at the Bergen Performing Arts Center in Englewood, NJ. Shortly thereafter, he gave an acclaimed Chopin recital at the prestigious Politeama Theatre in Palermo, Italy, and later appeared at the Nuove Carriere Music Festival, an international showcase for the world’s most promising young musicians.

Mr. Russo has also gained attention for an extensive repertoire that is comprised not only of well-known masterpieces from all periods but also of rarities of the piano literature. His virtuoso performances of works by Cziffra, Sorabji, Marc-André Hamelin and other composer-pianists have enthralled music lovers from around the world. He has also premiered compositions by Lowell Liebermann, Paul Moravec and Mr. Hamelin.

Mr. Russo has performed in such eminent concert halls as the Concertgebouw in Amsterdam, the Konzerthaus Berlin, Salle Cortot in Paris, Teatro Politeama in Palermo, Weill and Zankel halls at Carnegie Hall and Nagasaki Brick Hall in Japan. His recitals include performances for The Rachmaninoff Society, the Dame Myra Hess series in Chicago, Concerts Grand in Santa Rosa (CA), the American Liszt Society, the Houston International Piano Festival, the Husum Festival of Piano Rarities in Germany and the Chetham’s International Piano Festival in Manchester (U.K.), among others. In November 2010 the Italian Academy Foundation presented Mr. Russo in a sold-out Chopin & Schumann anniversary concert at Carnegie Hall.

Mr. Russo has appeared as a soloist with the Slovak Philharmonic in Bratislava, The Jacksonville Symphony in Florida and The Brussels Chamber Orchestra in an opening gala of The Music Festival of the Hamptons. He also has toured with the Orchestra Sinfonica Siciliana for performances of the Rachmaninoff 3rd Piano Concerto and was the featured soloist with the New York Asian Symphony on tour in Japan.

In the summers of 2017 and 2018, Mr. Russo gave solo recitals in the recently opened Stoller Hall in Manchester, UK. He also performed in London (St. Mary’s Perivale and Steinway Hall) and Vienna (Gegenklang), and in September 2017, he performed with the world-renowned soprano, Sumi Jo, for the president of South Korea, to promote the PyeongChang 2018 Winter Olympics. In October 2018, he gave a highly praised performing in the Fernando Laires Series at the Eastman School of Music’s Kilbourn Hall. Also a passionate organist and music director of the Scarsdale Congregational Church in NY, Mr. Russo launched in May 2019 a unique Liszt project across the country, featuring the B-minor Sonata and the organ Fantasy on Ad nos, ad salutarem undam in piano/organ double-bill recitals.

At the invitation of Bechstein-America, Mr. Russo had the privilege of recording a DVD on the historical 1862 Bechstein piano (#576), originally owned by Franz Liszt. Additionally, he had the opportunity to record a DVD on Horowitz’s CD-75 Steinway piano; this represented the first recording made on this legendary instrument following Horowitz’s death.

Mr. Russo’s performances have aired on major radio stations in the US and abroad. His albums include, among others, Scarlatti Recreated, Russian Gems: Piano Rarities, Rachmaninov – Solo Piano Works and Images et Mirages: Hommage à Debussy. The latter, released to critical acclaim in October 2018 on the Steinway & Sons label, was chosen “Disc of the Month” by Italy’s Classic Voice magazine and was also featured in Gramophone’s “Sounds of America.” On October 4, 2019, Steinway & Sons released Mr. Russo’s newest recording, Chopin – Late Masterpieces.

Sandro Russo is a Steinway Artist.