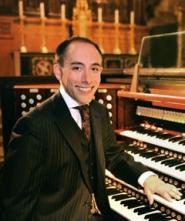 James D. Wetzel helps to kick off the fall portion of our 2021 Cathedral Great Organ Concert Series with a recital on Wednesday, October 20 at 12:40pm (following the 12:10pm Mass), open to the public and livestreamed from the Cathedral on our YouTube Channel. Come, bring a friend, and enjoy this 40-minute program in person, or watch live or later.

James D. Wetzel will present a 40-minute concert on the recently completed Lively-Fulcher Great Organ on Wednesday, October 20, 2021 at 12:40pm, following the 12:10pm Mass. We are so pleased once again to give our parishioners and the greater Washington, DC community the opportunity to hear marvelous music in a concert setting. Social distancing will be observed and face masks will be required in the Cathedral.

James D. Wetzel is the Director of Music and Organist of the Parish of Saint Vincent Ferrer and Saint Catherine of Siena on Manhattan’s Upper East Side where he directs its professional Schola Cantorum.  James served from 2010-2015 as the Organist and Choirmaster of midtown’s Church of Saint Agnes and from 2011-2016 was an adjunct lecturer in Hunter College’s music department.  Since 2010, he has also been the Assistant Conductor for the Greenwich Choral Society in Connecticut.  Additionally, he holds a post as Assisting Organist at the Cathedral Church of Saint John the Divine where he formerly served as Organ Scholar under Bruce Neswick. 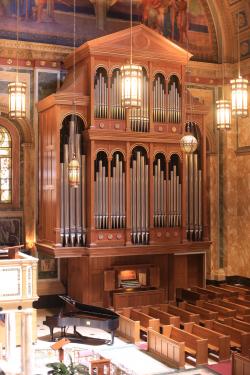 Mr. Wetzel is active as an organist and continuo player, having performed at the Berkshire Choral Festival and with the Collegiate Chorale, the Orchestra of Saint Luke’s, the American Symphony Orchestra, the American Classical Orchestra, the Cecilia Chorus of New York, the National Chorale, the Oratorio Society of New York, and the Paul Winter Consort.  He is the sub-dean, chairman of the program committee, and editor of the New York City Chapter of the American Guild of Organists, a board member of the Catholic Artists Society, and a member of the New York Purgatorial Society and the Society for Catholic Liturgy.

Born in Pittsburgh, James earned a bachelor’s degree in organ performance from The Juilliard School where he studied with Paul Jacobs and was the first person ever to graduate with a master’s degree and a professional studies certificate in choral conducting from Manhattan School of Music under Kent Tritle.  He also studied privately with Donald K. Fellows and Robert Page and spent a year reading Early Christianity and Apologetics at Columbia University.