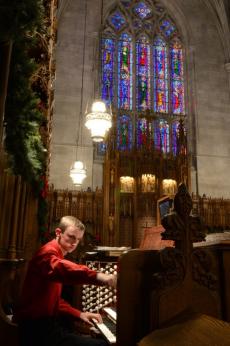 Organist Matthew Cates continues our fall 2021 Cathedral Great Organ Concert Series with a recital at 12:40pm (following the 12:10pm Mass) on Wednesday, November 17, open to the public and livestreamed from the Cathedral on our YouTube Channel. Come, bring a friend, and enjoy this 40-minute program in person, or watch live or later.

Social distancing and face masks will be required in the Cathedral.

Matthew Cates is an organist, pianist, harpsichordist, improviser, and composer. He has performed in many venues across the United States and Europe, including the Washington National Cathedral, Duke University, Église de La Madeleine, Église Saint-Eustache de Paris, St. Bernard de La Chapelle, The American Cathedral of Paris, and Notre Dame d’Auteuil, among others. Additionally, he has performed at the Flagler Museum in Palm Beach, Florida and at West Point Military Academy as the “Class of 1936 Distinguished Organ Recital.”

Matthew currently studies organ as a Kenan Organ Scholar at the UNC School of the Arts with Dr. Timothy Olsen. He also studied at L’Académie Internationale d’Orgue in Paris, France, where his teachers included primarily Frédéric Blanc, with further instruction by Andrew Dewar, François Espinasse, François-Henri Houbart, and Baptiste-Florian Marle-Ouvrard, among others.

After creating much excitement with his playing of the final variation of Duruflé’s Veni Creator – at the age of 15 – at an AGO chapter gathering, Matthew’s performance drew attention as “…technically and musically masterful. His love for the music is infectious.” (The American Organist AGO Chapter News, July 2015). He has been described by such distinguished organists as Frédéric Blanc as ‘An excellent and brilliant musician. Just as at ease with the Duruflé Suite op. 5, as Bach’s Great Prelude and Fugue in E minor BWV 548, he possesses a beautifully solid technique and a sensitive musicality.’ His passion for the music of Maurice Duruflé led him to learn and perform Duruflé’s complete works before entering his freshman year of college.

Having synesthesia, Matthew has a particular interest in the music of the impressionists and those they inspired. This has led him to learn and perform many of the works of Debussy, Scriabin, Ravel, and Messiaen. His piano performances have received high praise stating: “His level of preparation was flawless, allowing the difficult intricacies of the music to weave their impressions without distraction” – Craig Williams, Organist and Choirmaster, Westpoint Military Academy and Westminster Choir College