Movie Screening & Discussion - Pope Francis: A Man of His Word

Join the Creation Care Team as we celebrate Laudato Si' Week (virtually) with our parish community. Join us for a documentary screening and discussion of Wim Wenders' "Pope Francis: A Man of His Word" (2018, 92. min.) on Wednesday, May 20 from 6pm to 8:30pm. 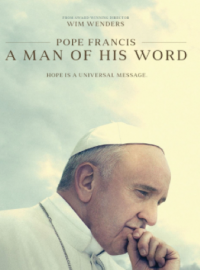 Online Film Screening and post-screening discussion via Zoom. This documentary from three-time Academy Award nominee Wim Wenders is a personal journey with Pope Francis. A rare co-production with the Vatican, the Pope’s ideas and his message are central to the film.

The film’s direct-to-camera visual and narrative concepts engage the audience face-to-face with the pope, creating a dialogue between him and the world.

Throughout the film, Pope Francis shares his vision of the Church, his deep concern for the poor, his involvement in environmental issues and social justice, and his call for peace in areas of conflict and between world religions.

Wim Wenders, an internationally acclaimed filmmaker and photographer, brings to us the sensibility of a great artist. He employs the power of art to bring Pope Francis to us.