Join us on Sunday, March 7 at 3:30pm for a recital by Lynn Trapp, free and open to the public, and livestreamed on the Cathedral YouTube channel.

Organist Lynn Trapp will present a 50-minute concert on the recently completed Lively-Fulcher Great Organ on Sunday, March 7  at 3:30pm. We are so pleased once again to give our parishioners and the greater Washington, DC community the opportunity to hear marvelous music in a concert setting.

Featured works include Organ Sonata No 1, by Alexandre Guilmant (1837-1911), Passacaglia in C Minor  BWV 582- Johann Sebastian Bach (1685-1750), Triptych  by Stephen Paulus  (1949-2014) and Te Deum by the recitalist. This concert will be both open to the public, with strict social distancing and CDC guidelines observed, as well as livestreamed on our YouTube channel. Seating areas will be roped off and  face masks will be required to enter the Cathedral. 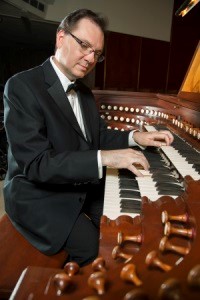 Dr. Lynn Trapp holds a distinguished career as concert organist, pianist, conductor, composer and liturgist.   His professional work is held in highest regard with engagements that include conducting orchestra/chorus at Carnegie Hall, NYC, performing recitals at colleges/universities, and churches/cathedrals in the U.S. and abroad (Westminster Abbey, St. Paul’s Cathedral in London; St. Peter’s Basilica in Rome; St. Patrick’s Cathedral and St. Thomas 5th Avenue, NYC among many others)  receiving numerous academic awards, and serving as clinician for conferences and conventions especially those of the National Association of Pastoral Musicians (co-chair 2018 NPM national convention, Board of Directors member) and the American Guild of Organists.

As composer he has more than 100 titles with several major publishers, and has received many commissions including an organ work for the Harvard Arts Festival, Evocation, premiered at Memorial Chapel, Harvard University, in 2019.

Dr. Trapp is the recipient of prestigious awards including the National Presser Foundation Award and the International Spirit and Truth Award from the University of Notre Dame.

In 2011, the University of Notre Dame invited him to establish his career archives in perpetuity at the Hesburgh Library.

He presently serves as Director of Liturgy and Music at St. Joseph Catholic Church in Baltimore, Maryland.  Prior to this appointment in 2015, he served at St. Olaf Church, downtown Minneapolis for nearly twenty years and served as instructor at several institutions including St. Olaf College. He holds degrees from Southern Illinois University at Carbondale (BM), University of Notre Dame (MMus/Liturgy), and after beginning doctoral work at the Eastman School of Music he completed the Doctor of Musical Arts degree at the University of Kansas.  He is married to Karen Trapp.