Home » About Us » Cathedral Staff 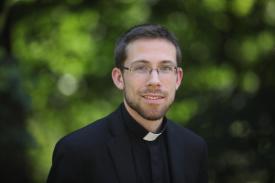 Fr. John Benson was born March 10, 1992 in Bethesda, MD, where he grew up with his two older sisters. His father spent most of his career with the American Red Cross, and his mother coordinated the RCIA program at their parish, Our Lady of Lourdes.

He attended public school from kindergarten until graduating from Bethesda-Chevy Chase High School, and attended religious education on Sundays at Our Lady of Lourdes, where he was also an altar server.

During high school, Fr. John enjoyed playing in a band, writing and recording music, and his plan was to pursue film studies in college.

In 2006 he became part of a community of the Neocatechumenal Way, through which he met priests and seminarians who exemplified the joy and freedom of following Christ.

In 2008 on a pilgrimage in New Jersey with his community, he felt called to give his life to Christ, and said ‘yes’, not understanding yet what it meant.

In 2010 he graduated from high school and entered the Redemptoris Mater Archdiocesan Missionary Seminary, to be formed as a missionary priest for the New Evangelization. During his seminary formation he spent two years in mission in Northern California. As a deacon he was assigned to St. Philip the Apostle in Camp Springs, MD.

On June 15, 2019 he was ordained a presbyter by Archbishop Wilton Gregory, and assigned as parochial vicar at the Cathedral of Saint Matthew the Apostle.